The pleasure of Hookah or Shisha smoking 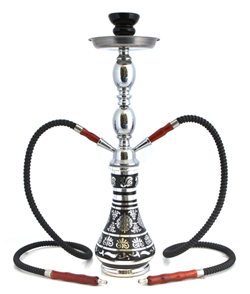 Smoking a hookah is a traditional and cultural activity that traces its origins back to the Middle East. Hookah smoking was done for various reasons. Some people smoke hookahs as a pleasure of life while gathering with friends and family to enjoy one another. This is the basic reason hookah smoking is very popular among Middle eastern cultures. However, there are more profound reasons people partake in the hookah.

Ask a hookah aficionado and you will learn the deeper meaning of the popular pastime. When people get together they are celebrating life but more importantly they are pondering and discussing life. Probably every subject under the sun comes up in these get togethers. The topics they discuss are an important to these people because it’s a time to get opinions, express opinions and vent frustrations of life. Who knows they might even be discussing solutions to world problems. Maybe they are figuring out how to make the world a saner place. While no real life solutions have come out of hookah sessions it does seem to serve the Middle Eastern societies in various and important ways.

Hookah is the standard term for Middle Eastern water pipe in America. In the middle east they are known as “shisha” which partakers smoked flavored tobacco. It’s quite amazing but the first hookahs were made out of coconuts which were termed “hukka” and that’s how the water pipe was given its name.

It’s probably true that hookahs are thought of in many different ways, but I always thought about as a kind of a nostalgic way of smoking as I had never tried a hookah until I was older in life. I had seen them in movies or drove past a hookah lounge now and then, but for the most part hookah smoking was somewhat of a mystery. As I have had the chance to delve in and experience smoking a hookah I learned a great deal about middle eastern culture.

It was described to me like this – the hookah truly presents the union of all elements. The hookah contains water in the base, represents the earth in the shisha, the coal represents fire, and the smoke represents air which I thought was profound and very interesting for me to learn. Come to think of it many cultures did ritualistic smoking – the American Indian “smoked the peace pipe.” There may be something to the opinion that smoking can contribute to clam and objective judgment as far as humanity goes.

These days we are seeing lots of new developments as far as attitudes about smoking in general. Vaping is becoming all the rage and people are trading off other products for vaping products. Now the traditional hookah is be adapted by companies like Aspire. Aspire is the manufacturer of a brand new product that attaches to the top of any traditional hookah. This is a huge development and may be great for hookah smokers. Vape allows hookahs to be used with all the e-juices out there which is big. People like to smoke hookahs because of the flavor and now that vaping flavors can be used this is a big step for vaping and hookah smoking.