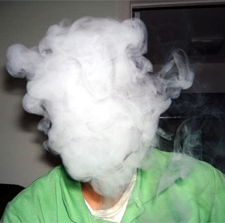 People who are experienced vapers are fighting hard to ensure that the vaping industry is successful. This industry is under attack by the FDA and other regulatory groups to make sure vaping is safe or to shut it down entirely. It’s unfortunate we have rookies vaping out there that are not doing their part. They vape and do not care if they are offending everyone that is in proximity of them with huge vapor clouds. It’s the same with everything – there are rules and some common sense etiquette tips that should be followed so as not to anger people. Bottom line if you are a vaper please do not do things as they can damage the vaping community and movement.

1. Acting like a vape evangelist
We get it and most other people get it. Vaping is relatively new and you started vaping to quit smoking. We know you are pumped and want everyone to try vaping, but enough! When people are receptive to your message about vaping then tell them what your reasons are for vaping and let them make their own decision about vaping. If you do share your story I would also be prepared to back that up with studies so people can truly see vaping can be a good alternative for some people. Just remember that vaping is cool but you’re not cool when you are out there evangelizing – you look like a vape jerk. Lastly, there is no need whatsoever to bash smokers.

2. Your E-cig is not a Fog Machine
Let’s be realistic. Everyone who vapes likes to blow huge clouds because it’s part of the fun when you are with friends in a private setting. The rookie vaper will likely go out of their way to blow super clouds and literally piss everyone off that is where they are at. Non-Smokers can get annoyed easily because they may not realize it’s just vapor. Some people even start talking about second hand smoke causing cancer and more. My advice is to avoid that situation altogether and vape like a cool cat and be low key.

3. Blowing Vapor in Someone’s Direction
It really gives a person a bad reputation when they do things like this but when other people see it then it gives vapers a bad name. It’s an absolutely rude thing to do and good etiquette would certainly not allow this. Even if you believe the vapor is not dangerous it’s still offensive. The solution is to be aware and simply turn your head and exhale so you do not blow vapor is someone else space.

4. You Vape in Conspicuous Places without a Care
Have you ever been to a place where a guy is standing smoking his cigy and you continuously getting bombarded by his second hand smoke? It can absolutely ruin your meal if you are at a restaurant with a seat near the door and smoker is within feet of the door. I believe the same is true for vapers. Vapers should not vape in places that can cause problems for themselves or annoy others. I would never vape in a restaurant, coffee shop, movie theatre, and many many other places. As a Vaper be cognizant of the situation you are in and act appropriately.

5. Vaping in front of the School Kids
If you are a parent and vape it’s your right. I believe that vaping has some attraction to kids, just as smoking does. With vaping there are a lot of flavors and some that may very well attract children. It’s probably a good idea as an adult to discourage children from vaping. It’s also a fact that one must be 18 years of age to buy vaping products. Using vaping as a tool to curb other addictions is fin but it’s not a good example for children who are young and impressionable. 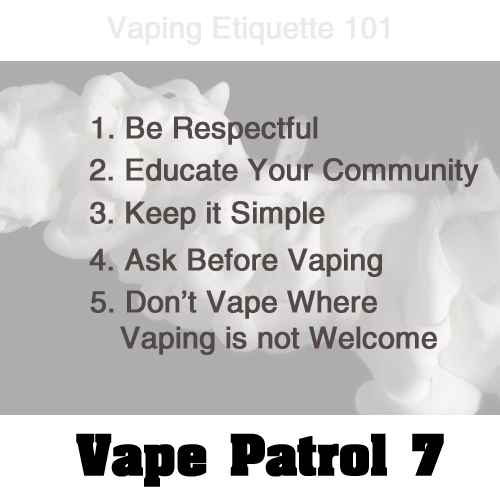