10 Facts the Vaping Community Need To Arm Themselves With

Vaping Facts That Silence the Most Ardent Critics 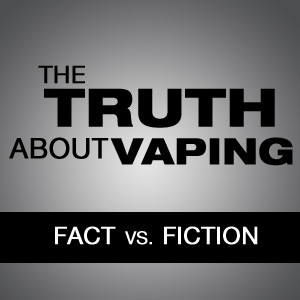 Most people are fairly new to the idea of “vaping”. They have seen vapers and watched them blow those huge clouds and that’s about all they know. Vaping is relatively new and a very popular alternative for many people. Most all of the people I know who are using vaporizers are doing so in place of smoking tobacco cigarettes. This is a fact and it seems to me this is a very large issue for local governments and because of that they are wanting to regulate the vaping industry more heavily.
Part of the reason government is assaulting vaping is because very misunderstood and the people who want to regulate this product want to make claims that are wholly false. I am attempting with this article to clear up some of the mythology of vaping and to set the record straight for any legislators who might read this article.

I believe that when electronic cigarettes were first launched on the market they were the small and thin cigarette look alikes that had the blue light as a tip. This is what is called an E-cig and are not the same as what is being bought and used by the vaping community these days. The original e-cigs they came with cartridges that were pre-filled, and had limited flavors.
The vaping industry as a new industry is in the early stages of development. Even though vaping is relatively new there have already been many changes in this fledgling industry. First we had the e-cigarette which was originally touted as a way to quit smoking now we have what are being termed as APV’s. AVP stands for Advanced Personal Vaporizers or Vape Pens for short. These are relatively new products and are quite different from the first vaping products – e-cigs.
Today people are introduced to vaping primarily because of smoking and the want or need to reduce that habit or quit altogether. It’s important to note that trying to sell vaping products as a way to quit smoking is against the law as outlined by the FDA. The point here is that e-cigs which were the first to hit the market were loaded with nicotine, and were sold as a way to quit smoking. With vape pens it is possible to get e-juice that has nicotine but nowadays the focus is on flavors, huge clouds and trying out the newest products.
In a nutshell e-cigarettes are quite different from the mods vaping companies are manufacturing today. The orginal vaping product is a throw away product and vape pens are products people re-use and have a huge selection of flavors to choose from.

E-Juice are not Made with Toxic chemicals

What is e-juice? Ejuice or e-liquids are made of a base material, usually Vegetable Glycerin. Vegetable

Just so you know PG is the main ingredient in asthma inhalers and children on a daily basis are inhaling Propylene Glycol. It’s believed that this is harmless and can be safely inhaled. PG and VG are similar as a base for e-juice but they have different physical qualities. PG is much thinner in viscosity and carries the flavors better than VG. The other ingredients are usually natural flavors, food grade materials that is determined by the individual juice maker.
E-juices can be made with or without nicotine. The makers of the e-lquids usually make variations of the juice with nicotine. Some producers use small amounts of nicotine others do not add any nicotine to the e-juices they produce. So if you want nicotine or not this is a choice for vapers. The fact of the matter is vapers are focused on the flavors as opposed to inhaling nicotine laced e-liquids.

Vapers usually use no or very little nicotine when they vape

It’s true most people who vape eventually ween themselves off of nicotine or never buy e-juice that contains it. Because there are different levels of nicotine in the various products people choose what they want and people are predominantly buying e-liquids that contain low or no levels of nicotine. To me the sales that I see prove the point that vaping is not just for people who are trying to transition from smoking cigarettes.
It’s true people do see vaping as a better alternative and that fact is the reason why the e-liquids with nicotine are still on the market – there is a demand for them. As I stated before people are more interested in flavor than nicotine. I imagine this will be the trend in the next few years – more flavors being offered to the new vapers. Also, it’s a fact that when people smoke they have their sensation of taste altered and this is a reason flavor usually wins out to e-juice that contains nicotine.

No responsible Seller would Sell Vaping products to Minors

In many states across America it is illegal to sell e-cigarettes or related products to minors. I believe legislation is pending in many other states to combat this issue. It’s common sense to prohibit minors from engaging in an activity that is meant for adults, and the fact of the matter is reputable sellers will not sell to minors.
There is no need to “create” new customers because the large majority of vapers are ex-smokers which means we do not need to sell to children to make sales. There are plenty of tobacco smokers looking to change their habits and vaping is their alternative.

The Vaping industry is very aware that they are in the cross hairs of state, local and even the federal government. I believe the industry takes this very seriously and to mitigate this they are creating warning labels for the products they are producing.
Common Warning Label on E-juice Bottles.

“Warning: May contain nicotine. Keep away from children and pets. For use by adults 18+.”

Also, the industry are using “clean rooms” in the manufacturing of the vaping juice process because they want to be head and shoulders above any regulations placed on them. This is not something that the industry is not being required to do , but they are doing it on their own as a matter of quality control, self preservation and showing goodwill to their customers.

There are only two sides on this issue – you have either heard e-cigs are harmless or they are more toxic than cigarettes. I believe that this is the argument that this industry needs to resolve, and there have been many studies on the subject. I will provide you some.

We found that the e-cigarette vapours contained some toxic substances. The levels of the toxicants were 9–450 times lower than in cigarette smoke and were, in many cases, comparable with trace amounts found in the reference product.

For all byproducts measured, electronic cigarettes produce very small exposures relative to tobacco cigarettes. The study indicates no apparent risk to human health from e-cigarette emissions based on the compounds analyzed.
These are two studies that are pretty solid with the conclusions that it’s pointless to argue with people who oppose things just to oppose them when the facts illustrate a different narrative. Across the board the vaping industry feels that the vapor is safe – more studies are being done as we speak.

Vaping in Public is a Manufactured Issue

The studies cited above are very clear. There is little evidence that secondhand vapor in public places are a hazard to others. In fact the concerns people have about secondhand vapor are completely unfounded, overstated and completely silly. To put it in a nutshell there is no need for any new law.
However, from one coast to the other there are people and groups that like to establish policies that make them and everyone they represent feel safe. It is that paternalistic attitude that allows for legislators to make laws without the consideration of businesses. These legislators frame the issue is a perverted way by using children in the fight to create new over bearing laws.

They were smokers and now they are Vapers!

As the vaping industry continues to grow it’s quite evident to me that people who trash mouthed vaping are going to have to reassess as more and more smokers are crossing over. As I stated before that no vape sellers can claim vaping can stop one from smoking. Vaping is an alternative to smoking. Ask a smoker about why they vape and what it has done for their lives. There are also studies out there show and prove with anecdotal evidence that Vaping helps smokers change their habits.

Some Health Groups are Recognizing the Benefits

I think that medical professionals and health organization alike woudl like to know definitively if vaping is better than smoking. It’s important for them to be up to date on the research and when they are able to review impartial and peer reviewed studies they probably come to the same conclusion. The first conclusion is longer term studies need to be undertaken, but based on the current evidence vaping may be less dangerous than cigarettes.

Many Studies have been done!

Vaping and E-cigarettes are probably one of the most studied issues in the public today. I call for more long-term studies because I think it’s prudent and necessary, but the evidence that we currently have demonstrate vaping is far less toxic than smoking. There are study after study that show this, and yet the media and political types still need and want to regulate an industry that to this point is by all measures harmless.

Thank you for another wonderful article. Where else could anybody get that type of info in such an ideal way of writing? I’ve a presentation next week, and I am on the look for such info.